Methodology of work in plasma welding

There are many welding methodsthat we can use in practice. There are also more and more opportunities that give us the ubiquitous technological development. Although welding has been known since ancient times, new methods are being discovered every now and then. One of them is plasma welding, which is not yet fully known to those who have been dealing with it for years.

What is plasma welding?

You may have come across the abbreviation PAW, which stands for Plasma Arc Welding. It is nothing more than plasma welding or plasma cutting. If you know the method TIG or - moreover - you have already welded with this method, we have good news: PAW is very similar to it and is even an extension of it. Anyone who has dealt with welding at least several times has heard about the TIG method - although it requires experience and skills, it ensures an accurate and durable connection of metals. It is especially useful when quality matters. Plasma welding, as it is an extension of TIG, in addition to accuracy provides increased efficiency.

Plasma - what is it?

Plasma is called the fourth state of matter because of its properties - it resembles gas, but unlike gas, it consists of positively and neutral electrically charged particles. Despite the presence of these particles, plasma remains inert as a whole. The specificity of current conduction depends on the temperature - the higher it is, the lower the resistance and the greater the current strength. It can also be seen from the fact that the plasma produces an electric arc, because then the intensity exceeds its limit. It is this property that is used for plasma cutting.

We can distinguish three types of the PAW method. The first one is called microplasma and the current intensity in the process is between 0.1 A and 20 A. The next is plasma welding, where the intensity ranges from 20 to 100 A. The last type is welding with the so-called The "eye". In this case, a current greater than 100 A is used and the plasma arc then penetrates the thickness of the material.

A few words about the process 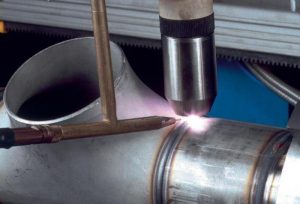 After all the theory, go to practice, i.e. the welding process itself or plasma cutting. So how is it going? First of all, two gas streams are used - the plasma one that forms the plasma arc needed for welding, and the shielding or protective one. The whole process is carried out by melting and ejection of metal, which occurs thanks to an electric arc with high kinetic energy. The arc glows between the non-consumable electrode and the workpiece that we are cutting. Ionization takes place due to the fact that the gas stream is passed through the electric arc. The cutting torch, thanks to its high power, creates the plasma necessary for the entire process. We are dealing with cooled walls of a nozzle which narrows the electric arc. Due to the high temperature in the core of the arc, which can reach up to 30,000 K, and the high speed of the passing plasma, it melts and blows the cut material out of the fracture.

Which gas is the best?

We most often use air for plasma welding. However, a lot depends on what device we use. If it can draw more power, we must use noble gases such as argon, but also other gases - hydrogen, carbon dioxide and nitrogen. Sometimes it is necessary to select mixtures, e.g. argon with hydrogen or argon with helium.

In order to perform a plasma cut well, we need to know what we can cut. This method is most useful for us, first of all, in cutting materials that conduct electricity. These are carbon steels, aluminum and its alloys, as well as cast iron, brass and copper.

Each welding method has both advantages and disadvantages. Let's start with the former - it's important that we no longer need to heat up while the process is running, which gives us a quick piercing. If we care about speed, plasma cutting guarantees much higher speeds. They are up to seven times larger than when welding with oxygen and gas, so this is a significant difference. As a result, the temperature does not have a large effect on the material, which ensures low deformation due to heat and a narrow cut-affected zone. The process is distinguished by good quality and a wide range of cutting thicknesses. So we can cut very thin sheets smaller than a millimeter and very thick - over ten centimeters thick. Bearing in mind thin materials, it is worth mentioning that we can cut without burning them. It is also easy to automate the entire process. The last thing is the vertical cut, which is also great.

With a large number of pluses, you also need to pay attention to the disadvantages of the entire process. Plasma cutting produces gases and dust that are harmful to health. For this reason, it is very important to take care of work safety. Another harmful factor is the huge noise during welding. The problem can be corrected when cutting is made underwater, but this is not often done. During the process, we also come into contact with strong ultraviolet radiation, which can also have a bad effect on our health. From the defects that may make welding difficult for us, it is necessary to distinguish possible difficulties in maintaining the perpendicularity of the edges. There are also changes in the cutting influence zone, which is also a downside to the entire process.

Where can I use plasma cutting?

Due to the fact that plasma welding ensures high quality, it is used in industries where the quality of workmanship counts. It is the aviation industry, which also includes the construction of space structures, as well as processing. In addition, plasma cutting is important in the chemical and petrochemical industries.

An interesting fact is the possibility of plasma gouging, which is provided by plasma cutters. Thanks to this, we can remove metal efficiently and cleanly. We can groove both ferrous and non-ferrous metals. There is also less noise than other warm gouging methods.

Plasma welding has many advantages and is recommended for those who also know how to handle TIG. If you want a really good quality weld, consider plasma cutting. We can then be sure that we will get the desired effect faster than when welding with oxygen-gas methods.